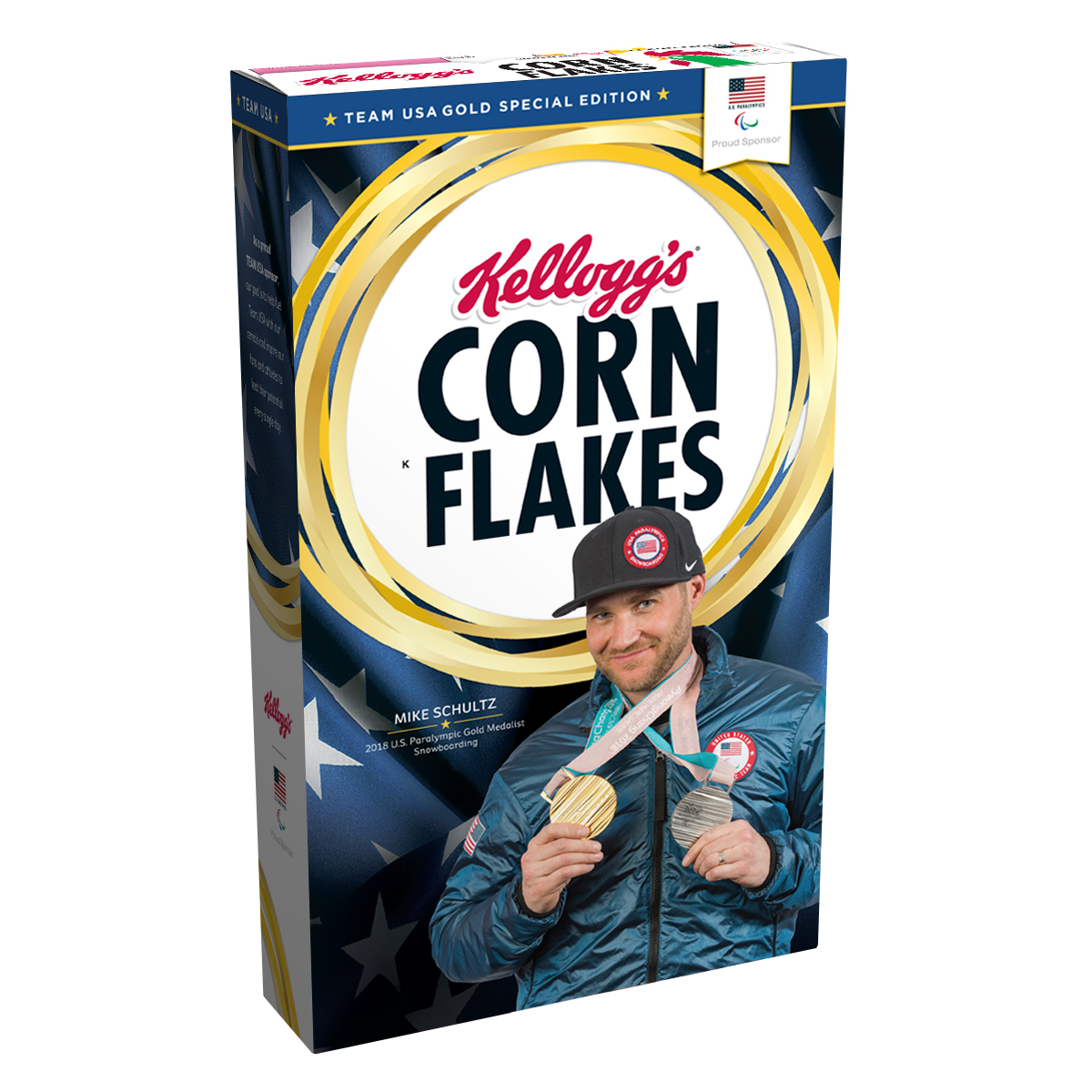 BATTLE CREEK, Mich., April 3, 2018 /PRNewswire/ -- U.S. Paralympic Snowboarder and Team Kellogg's™ member, Mike Schultz, won the gold medal for Team USA in the Snowboard-Cross and the silver medal in the Banked Slalom this month at the Paralympic Winter Games PyeongChang 2018. To celebrate Schultz's victories, Kellogg's® has announced that he will be the first U.S. Paralympian to be featured on a Gold Medal Edition box of Corn Flakes®.

"It was a true honor to have represented my country at my first Paralympic Winter Games and proud to bring home gold and silver medals for the U.S.," said Schultz. "I'm so thankful for my family, who have been with me every step of my journey, and the support from Team USA and Team Kellogg's."

Schultz was a first-time Paralympian for PyeongChang 2018 and was honored to carry the American flag for the U.S. Paralympic Team at the Opening Ceremony.

What Gets Mike Schultz Started? Waking up with his family and making the most of every day. His Gold Medal Edition boxes are available in limited quantities for a short time only on KelloggsFamilyRewards.com.

Watch the Team Kellogg's #GetsMeStarted video to learn more about Schultz's journey toward the Paralympic Winter Games 2018, and share what drives you to tackle each day with #GetsMeStarted.

About Kellogg Company
At Kellogg Company (NYSE: K), we strive to enrich and delight the world through foods and brands that matter. Our beloved brands include Pringles®, Cheez-It®, Keebler®, Special K®, Kellogg's Frosted Flakes®, Pop-Tarts®, Kellogg's Corn Flakes®, Rice Krispies®, Eggo®, Mini-Wheats®, Kashi®, RXBAR® and more. Net sales in 2017 were approximately $13 billion, comprised principally of snacks and convenience foods like cereal and frozen foods. Kellogg brands are beloved in markets around the world. We are also a company with Heart & Soul, committed to creating three billion Better Days by 2025 through our Breakfasts for Better Days global purpose platform. Visit www.KelloggCompany.com or www.OpenforBreakfast.com.

About Mike Schultz
Schultz has been a lifetime enthusiast of action sports. When a snowmobile accident during a professional competition in 2008 cost him his left leg above the knee, there was only one thing for Mike to do – find a way to continue competing in sports at a high level. To do this, he had to design himself a better leg.

Only seven months after his accident, Schultz went on to compete in his first Moto event post injury and won a silver medal at the 2009 Summer X Games in Adaptive Motocross on a prosthetic leg he designed. It was after this that Mike realized the need for advancements in high impact adaptive sports prosthetics and founded his own company to continue making prosthetics in July 2010.

Currently more than 100 wounded soldiers, action sport athletes and amputees wanting to return to an active lifestyle are using Mike's prosthetic equipment. In 2010, Schultz was inducted into the Athletes with Disabilities Network Hall of Fame in the U.S.

Almost 10 years since his accident, Mike has eight X Games gold medals to his name between Motocross and Snocross and was named to the U.S. Paralympic Snowboard team.