BATTLE CREEK, Mich., April 14, 2015 /PRNewswire/ --  This Earth Month, MorningStar Farms, a leader in the veggie movement for over 40 years, is spotlighting how eating a diet with more plant-based foods is one of the easiest, most delicious "acts of green" we can do today for a better tomorrow. To spread awareness, MorningStar Farms teamed up with food expert and "Top Chef" host Padma Lakshmi to encourage people to take the Veg of Allegiance™. The pledge is simple –eat veggie protein instead of meat, for even just one meal a week, and share your pledge on Facebook, Twitter or Instagram using the hashtag #VegAllegiance.

"My life revolves around food - I'm either cooking it, eating it or tasting it as the host and a judge on 'Top Chef'," said Padma Lakshmi. "I'm an adventurous eater, but try and stick to a diet rich in vegetables because I believe what we eat matters. That's why I'm taking the Veg of Allegiance and want others to join me."

It's Just What the World Ordered

Evidence revealing the impact of food choices on the planet and on people's health is growing. In fact, a 2015 report from the Departments of Agriculture and Health and Human Services recommend a diet with more plant-based and fewer animal-based foods, maintaining that it can be healthier and produces less environmental impact1. It's also noted producing meat can generate more greenhouse gas emissions than everyday road transportation combined.2

And, people are starting to take note. In fact, today nearly half of the people in the U.S. are trying to eat less meat3. MorningStar Farms believes no moment is better than now for people to take action.

"We're here to help people change not just their diet, but also help the planet," said Todd Smith, Director of Brand and Innovation Marketing at MorningStar Farms.  "MorningStar Farms champions a more veggie-full life and hopes that, through the Veg of Allegiance, we will create real, positive change in our world."

MorningStar Farms offers more than 30 nourishing products and over 300 delicious recipes to help pledge takers follow through on their veggie commitment. Whether you're a first-timer or a veggie vet, the Veg of Allegiance invites people to share their pledge on Facebook, Twitter and Instagram to motivate others. Those taking the pledge may be eligible for earth-friendly prizes, including a hybrid car, commuter bikes, or a year's supply of MorningStar Farms products4.

Through the MorningStar Farms "Just What the World Ordered" tour lucky veggie-lovers across the country will get a chance to taste the brand's new offerings, including the Spicy Indian Veggie Burger, Chipotle Black Bean Crumbles™ and Garden Veggie Nuggets, and sign up for the pledge at events.

Visit MorningStarFarms.com for tour stops and learn more on how to take the veggie pledge with the hashtag #VegAllegiance.

1 According to the 2015 Scientific Report of the Dietary Guidelines Advisory Committee, "In general, a dietary pattern that is higher in plant-based foods, such as vegetables, fruits, whole grains, legumes, nuts, and seeds, and lower in animal based foods is more health promoting and is associated with lesser environmental impact (GHG emissions and energy, land, and water use) than is the current average U.S. diet."

3 May, J. (2012) Vegetarianization Strategies In Food and Drinks: Understanding the Product, Manufacturing, and Brand Strategies Required to Profit from the Emerging Trend of Restrained Meat Eating. Business Insights Limited. 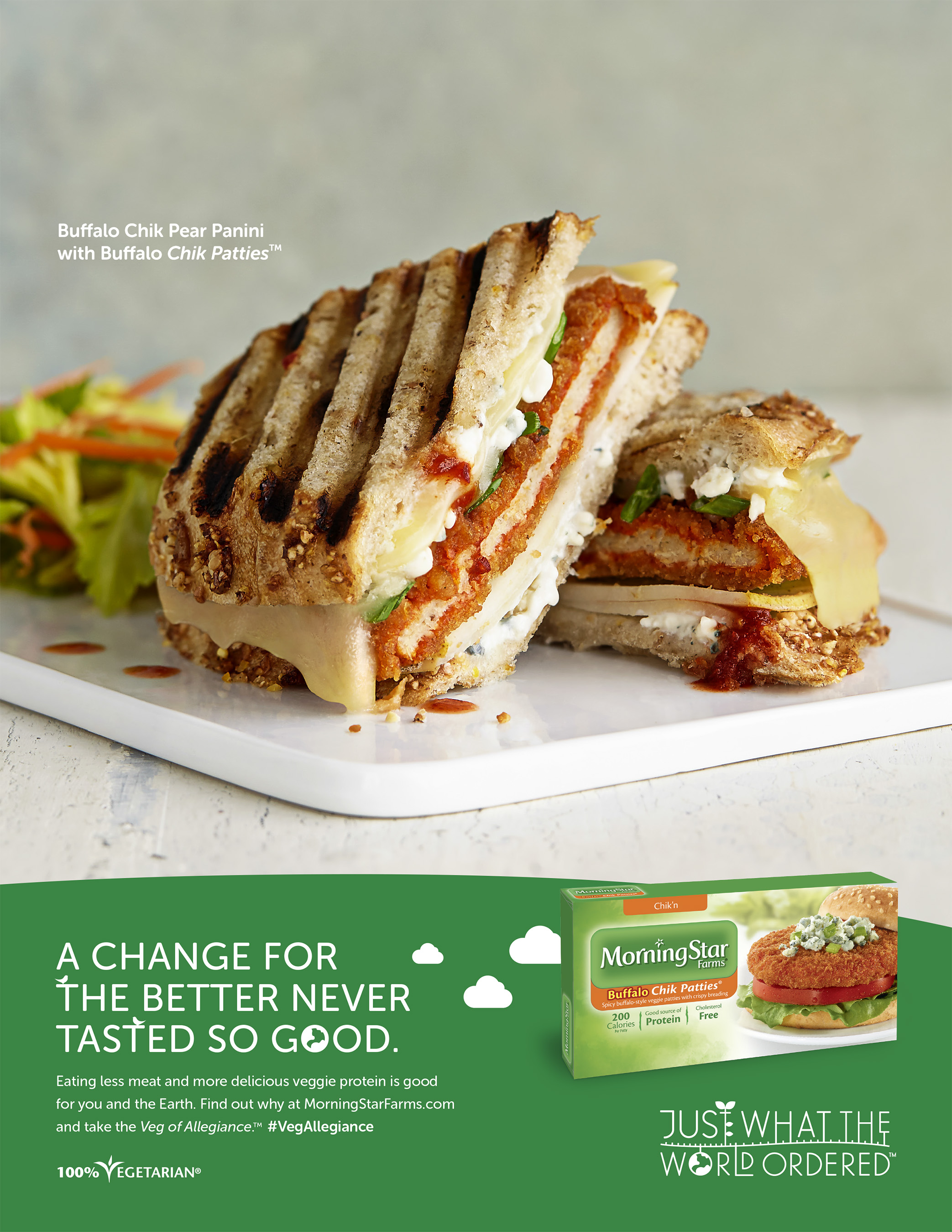 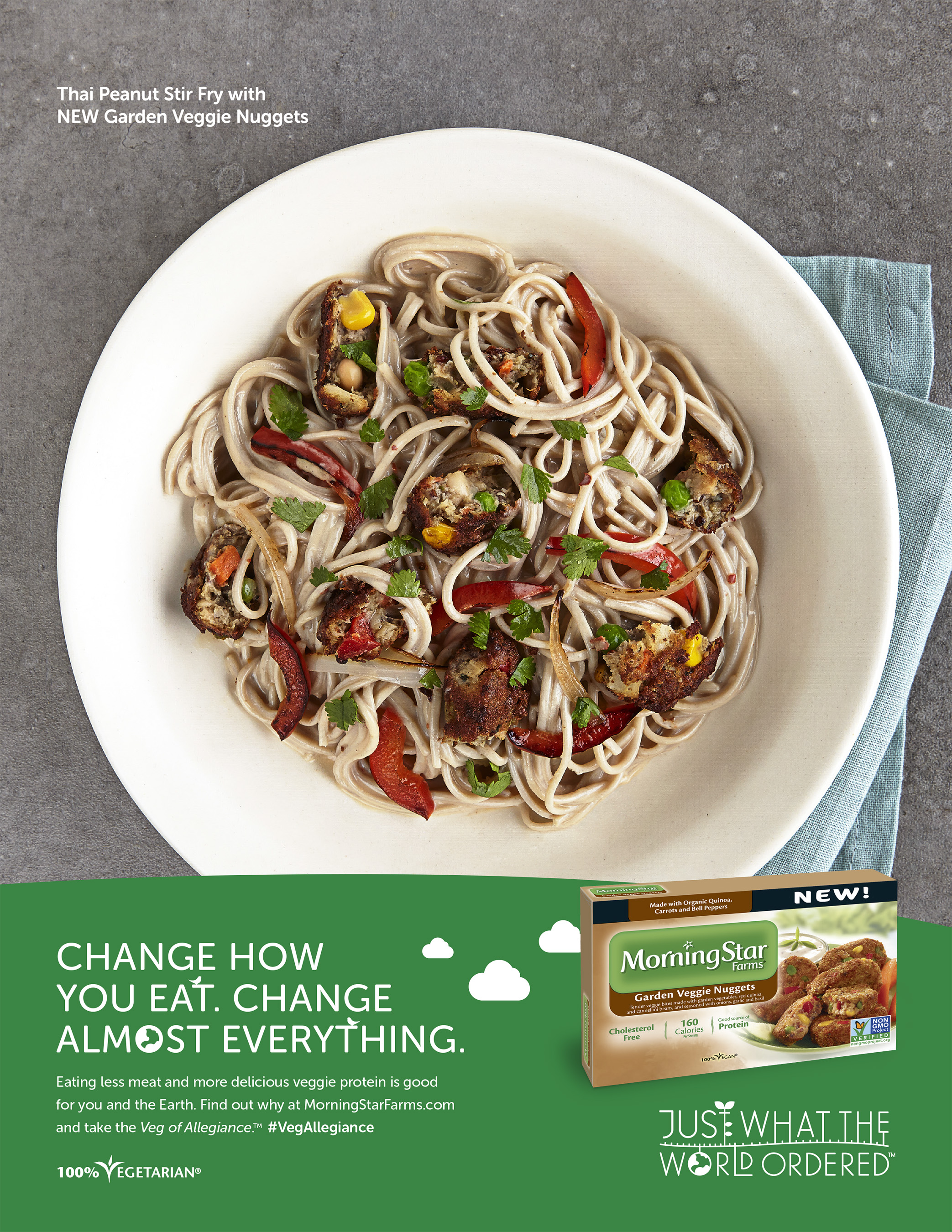